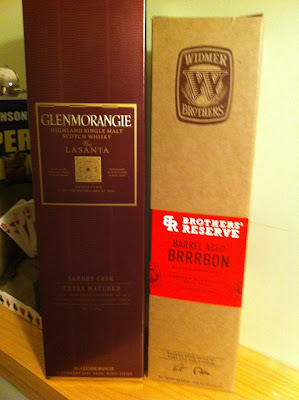 I went to Apollo Northwest Liquors tonight on the quest for something tasty. The manager was working again, they guy that hooked us up with the Lagavulin.

Lately, I've had the Balvenie on the brain, so the quest was on to find another double casked. As it turns out, Glenmorangie has two different double casked spirits. One is a port and the other a sherry.

Since the Balvenie was on my brain, I chose the sherry.

He also suggested a beer, Brothers Reserve Barrel Aged Bourbon beer. Um, BOURBON BEER. While I'm quite sure this will never be allowed as an official drink at whiskey club, um BOURBON BEER! This beer was cask aged in bourbon casks.

So tomorrow night, my house!
Posted by OhCaptain at 10:00 PM