Because the Captain is preemptively posting for tomorrow's meeting, I better get the update in for last month.

Let me start off by saying, I am not the biggest whiskey connoisseur of the group. Hell, I don't even know if there is an "e" in whiskey or not. Being the late game fill in for the ailing wannabe host, I went out to the liquor store and simply wandered the aisles, which in of itself can be fun. Unlike the Captain, I asked some young punk working there for some advice. I also wasn't sure about the number of attendees, so I wanted something on the less expensive side. What I ended up with was this $35 bottle (well within the budget so the kitty is growing): 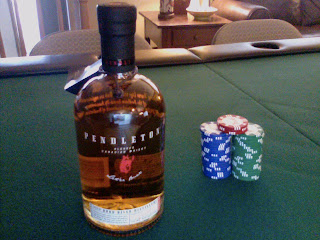 From the tag which appears to not have an "e" in whisky, who'd have thunk?

Pendleton Whisky was specifically created to celebrate the bold spirit of independence and hard-work ethic of the American cowboy and cowgirl. It’s borne of the rich tradition of the 100-year-old Pendleton Round-Up, one of the most prestigious rodeos in the world.

Pendleton Whisky has been a proud sponsor of the Pendleton Round Up since the brand’s inception and we are honored to be a part of an event that has such a long standing history in Oregon.

Each Pendleton Whisky bottle prominently features the rodeo’s famous bucking horse symbol and Let’er Buck slogan. A portion of proceeds from every bottle sold is donated back to the Pendleton Round-Up.

I actually liked this one, although it was not overly unique. A smooth drink, not a rough finish (which I dislike) and well received by all who attended. Although I don't think it really made that big of an impression overall. Another person who attended brought some Jack Daniels Honey, which made for a nice sampling night.

As far as the poker went, game 1 went oversees to the Dutchman and game 2 was a LONG heads up battle that I eventually took down.